After years of isolation I am finally able to interact with others and continue with my studies.  The new workshop has only a few things - mostly space - but it is perfect.   I have Father's word that I have the only keys.  In return for the use of the workshop I've promised to write in my diary each day and keep up the practice of meditation that M has taught me, as well as not speaking to anyone but Father about him. It is also a given that I show up for dinner, as this is a routine that proves to my family that I am well again.
It is sometimes difficult not to speak of M, as I wish others to know who is responsible for my miraculous recovery.  When they ask I have to pretend it was merely a childhood illness that I outgrew.  I'm sure it's just the opposite, that I would have gotten worse until I was driven insane within a few years.  I'm lucky Father had so many friends who travel extensively, or my fate would have been much different.

What purpose is there in the cities of light?  They move it from place to place for no apparent reason.  I have several theories but none of them can be tested.  How frustrating it is not to be able to interact with the creatures or objects in this strange landscape.
My new tutor has assessed my progress and has given my father an update.  We will be working on a series of science, math and language lessons and I look forward to them, as there are many species I cannot study without a thorough knowledge of Latin and taxonomy.

AFter working with my new tutor I skipped lunch and constructed the model for my new ship.  When I finally arrived home I saw ghosts in my peripheral vision and small transparent creatures hanging in the corners.  I immediately sat down to meditate and realized I had overtaxed my body and mind.  M said I needed to meditate twice a day but I became confident in my own strength to hold off the visions and paid the price.
Late for dinner - and of course that made Mother give my father one of those looks.  I have to be more careful if I wish them to be comfortable with my new freedom. 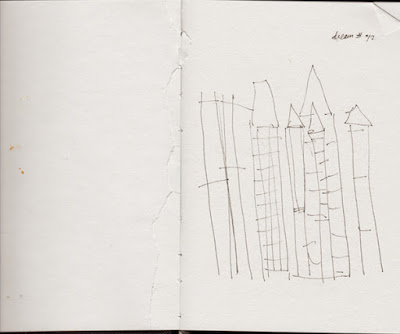 In the lucid dreams I can go to places no one has experienced yet.  I have asked about other lands from father's friends, and as they are great travelers I assume they would know better than most.  In my readings it is the same - there are no cities with the kinds of structures I have seen.
I am still wary of being caught in this state, but I cannot keep from exploring further.
M. says to imagine an anchor and a line stretching from where I am back to the anchor. 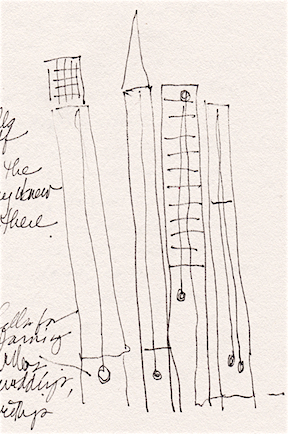 Are these really dreams, or are they real places?  Sometimes I am shocked by how real they seem.
I become despondent when I don't get away for several days it's as if the travel is somehow stabilizing my mental state.
Father is heartened that I am doing so much better, but he remains cautions, as we have tried so many treatments that have not had any lasting effects.  As M suggested, we are waiting a few months to see if this is a permanent state.
M is an intriguing character.  Being around him is so calming that my minds clears immediately and I am able to understand everything around me perfectly.  The delusions and strange creatures that plague me are held at bay, and we talk for a very long time about life and why I am afflicted so.
He laughed when I told him the nun story, and he looked quite scary when I told him about the preacher.  He says that perhaps certain dreams may be things I have seen and forgotten.  When he left he asked me to try to dream of the most calming place I have been.  That would be the glade, but the underwater world was also nice.  He said to picture a ship for these travels, so I don't panic when I find myself underwater and encounter large creatures like the (spike?) fish.
As I have a difficult time picturing the ship without wanting to build it I have started plans for a real one based on those in father's shipyards, similar to my models but able to float and maneuver underwater or in the sky. 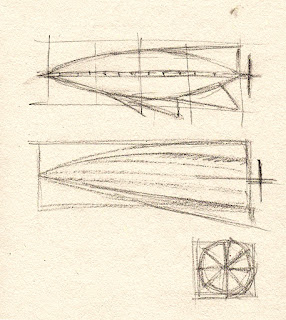 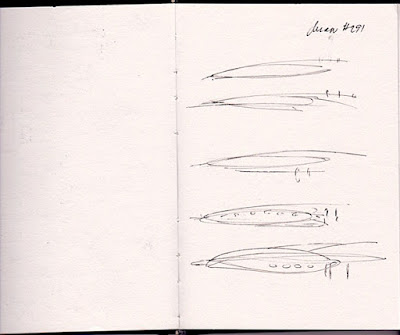 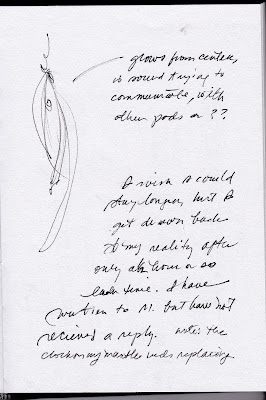 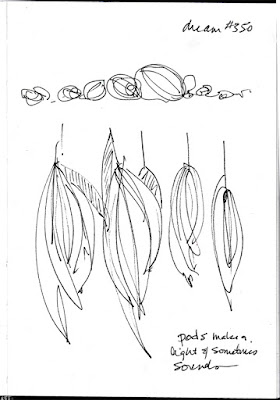 I haven't seen any living beings in the bright city world, though I am sure they exist, as the city changes.  It is a very colorful place, to the point of being gaudy, overwhelming stimulation.
It's as if the city is in a perpetual state of celebration.  What kind of creatures would build these structures, and why do they move them?
In all the worlds my mind goes to this is the most unusual world/reality.  Most realities have plants, animals, but no humans, no beings with intelligence.   Why, I wonder. 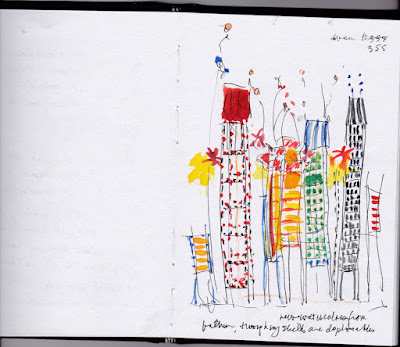 Out of Body or Lucid?

In my readings I've discovered that there are a few people who have had experiences like mine, and they call their travels out of body experiences.  They have gone to places that are definitely real while dreaming - they see their town, their homes, their own families, and have seen things they can verify.
So are my travels out of body or lucid?  Lucid dreaming is when you can direct where you go and what you want to do, according to my research.
But are these places dreams or real?  Am I directing my dreams or traveling in a dreamlike state to real places?
On his last visit M asked how long I have traveled in my dreams.  It is such a relief to finally talk to someone.  I clearly remember my mother's reaction when she realized I was seeing our house in my dreams, and the people moving around.   I had no idea that others didn't have the same kinds of dreams, and it came as a shock when I realized it wasn't normal.  This memory is very vivid, and I compare it to most children's sudden shock to find that Santa Claus is not real.  My mother seemed so scared by the idea that I promised not to do it any more, not understanding why it was wrong.
Around this time I also started seeing the small ghosts, or creatures in the house.  Some are very amusing, and I remember trying not to laugh aloud when they did funny things at the dinner table.  Those occasions invariably ended badly.  It was later that year that I started being treated by specialists to cure my visions.
No comments:

a lucid explanation.
2.)   characterized by clear perception or understanding; rational or sane:

I've received a letter from M.  He asks that I make sure to keep him updated on my progress and studies, as well as keeping my dream diary.  I have asked (again) if he thinks my dreams are of real locations or are only in my imagination.    I've sent a few pen and ink studies from the museum of natural history with my report, and I hope to hear from him soon. 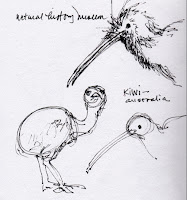 I've decided to start replicating what I see in my dream travels, at least as closely as I am able.
I have to try and form a more realistic portrayal of these areas, and the flat surface of my sketchbook does not do them justice.  My friend James is the only other person who is allowed in my workshop, and he has agreed to help in their construction.  He is the most loyal and understanding of friends, and he has many skills beyond my poor attempts at models.   He shows up early and pushes me to work harder and longer than I would otherwise, though he always makes sure that I eat and take regular breaks.  My family actually approves of him, which came as a great shock to me, despite his great character.
No comments:

diary pages, views on his father 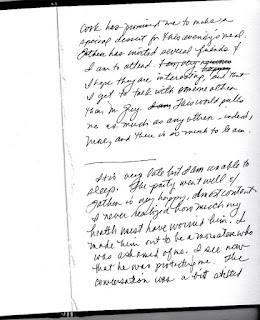 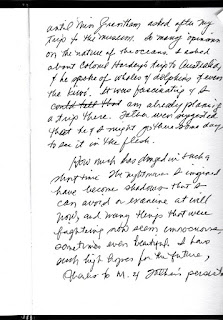 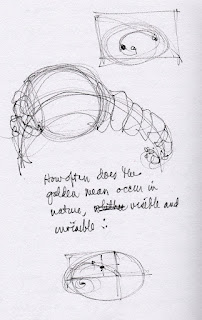 James and I are almost finished with the first four recreations of my dreams, or visions, as James calls them.  They are in an area of the warehouse with high ceilings and few windows.  We have had few interruptions.  I have invited several people to view them, and am hoping they are well received.  James is convinced these places are real and encourages me to show them to others in the hope that they will be recognized.  It is my greatest hope to find the answer, whether they are real or not.
No comments:
Home
Subscribe to: Posts (Atom)